In every instance when the Church has been assailed by one or another heresy, we find that many people are fooled by the heresy without actually understanding what is happening. Heresy is always presented as the truth and in this way many are misled.

The Nativity Epistle of Patriarch Tikhon: What He Really Said

Updated 9/15/12:
A passage from the Holy New Hieromartyr Patriarch Tikhon's Nativity epistle to diocesan hierarchs in 1921 is often misrepresented and mistranslated by proponents of name-worshipping in an effort to portray Patriarch Tikhon as sympathetic to their cause.
On September 11, 2012, the remaining three bishops of the synod of the Holy Orthodox Church in North America (Ephraim of Boston, Makarios of Toronto and Gregory of Concord) issued a statement on name-worshipping, in which they attempt to use this passage from the Nativity Epistle of Patriarch Tikhon in exactly such a way. 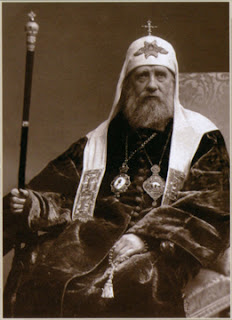 In fact, Patriarch Tikhon upheld the synodal decisions condemning name-worshipping, as well as those extending economia to repentant name-worshippers who wished to rejoin the Orthodox Church.  Here is a correct translation:

From the Nativity Greeting of Patriarch Tikhon to the Diocesan Hierarchs

…During these lofty days, when the Church celebrates the Nativity of the God-man, Who brought upon earth the peace and goodwill of our Heavenly Father, I deem it proper to remind you, in brief, concerning the Athonite name-glorifiers and to offer you some guidance on how to treat these monastics. From their case it can be seen that in its Resolution 3479, of April 22-25, 1914, the Holy Synod condescended to the spiritual mood and the disposition of mind of those Athonite monks who were not well versed in theology as expressed in books, nor very knowledgeable concerning formal proceedings, [and it, the Synod of 1914] allowed the previously required signed repudiation by the name-worshippers of their false teaching to be replaced with a written testimony [i.e., from witness] (by a sworn promise), while kissing the Holy Cross and the Gospel, of their Orthodox Faith, their exact following of the Orthodox Church, and of their obedience to the God-established hierarchy, believing according to the teaching of the Holy Church, adding nothing and subtracting nothing on their own, in particular as pertains to the veneration of the Name of God, not to believe that His Name is God’s essence, not to separate it [the Name] from God, or consider it another deity, and not to deify letters, sounds and random/accidental thoughts about God, and such who believe in this manner and who manifest their submission to the ecclesiastical authorities, the Holy Synod [of 1914] decided to receive into the Church, while those of priestly rank it permitted to perform services. However, while manifesting its condescension, the Synod did not alter its previous judgment regarding the very error contained in the writings of Anthony Bulatovich and his followers, which it decided to refer to the consideration of the Holy Pan-Russian Local Council, from which depends the resolution of this case in its essence…

The bishops of HOCNA introduce this passage with the following remark:  "Our Holy Synod endorses and espouses the theological solution to the controversy surrounding the Name of God, found in the following Encyclical of St. Tikhon, Patriarch of Moscow:"  Then they highlight these sentences in italics:

as pertains to the veneration of the Name of God, not to believe that His Name is God’s essence, not to separate it [the Name] from God, or consider it another deity, and not to deify letters, sounds and random/accidental thoughts about God,

They continue to insist on boiling down the essence of Patriarch Tikhon's words to these four points, which even the most fervent advocate of name-worshipping, Gregory Lourie, could embrace.


But what did Patriarch Tikhon really say?  In addition to these four particular points, he wrote that the synod was extending economia to the repentant name-worshipping monks, condescending to their spiritual mood and disposition.  But even in this economia, they were required to testify to:

their exact following of the Orthodox Church, and of their obedience to the God-established hierarchy, believing according to the teaching of the Holy Church, adding nothing and subtracting nothing on their own...

Further, Patriarch Tikhon wrote that while it was manifesting condescension to the repentant monks (extending economia to them in helping them return to Orthodoxy), the Holy Synod did not change its judgment on the heresy of name-worshipping itself.  The Holy Synod condemned name-worshipping as a heresy in 1913.   That judgment was never modified or overturned by the Holy Pan-Russian Local Council.  It stands to this day.